The Battle of the Ancre,13-18 November 1916 was the final engagement of the Somme Offensive. The objective was to capture ground north of the River Ancre and the villages of Serre and Beaumont Hamel. The weather by now had broken and there was heavy rain, turning the front into a muddy quagmire.  The assault was launched from the same front lines as the  failed 1 July attack. By the end of the battle Beaumont Hamel had been captured but not Serre. With the onset of winter the Somme Offensive came to an end and fighting was scaled back.

The 7 Bn King’s Shropshire Light and 10 Bn Royal Welsh Fusiliers were both in 76 Brigade, 3 Division and would fight side by side in the action at Serre.

The 7 Bn KSLI would advance in the sector to the right of Mathew Copse, the10 Bn RWF to the left and up to Mark Copse. The battalions were in support and it was planned that they would pass through the assaulting troops to capture Serre village. Zero hour was 5.45am. on 13 November. In a gloomy dark dawn of rain, thick fog and mist the battalions left the support trenches and advanced down a slope. Despite the poor visibility, glutinous mud, in places waist deep, progress at first was good. They reached the British front line and then continued forward to the German lines. Things now began to turn. The assaulting troops became held up and the deteriorating conditions made communications and observation very difficult. Direction was lost, units became intermingled and the situation became confused and obscure. Many men became isolated. The enemy began shelling no man’s land and the British front line adding to the chaos. Efforts were made to reorganise the troops but under the conditions it was impossible. By 9am orders were received to withdraw back to the start points with the hope that the attack would recommence later in the day. Again, not knowing where the men were, it was impossible to pass the order on. Over the course of the day groups and individuals drifted back, the last to return came in during the evening. All told the KSLI lost over 224 wounded, killed or missing, the RWF 289. The assaults at Serre had been a failure. Both battalions spent another two days in the line anticipating enemy counter attacks but none came, the Germans perhaps recognising the poor conducive conditions for success.

Between the 4 and 12 November 1916 the 115 Brigade Royal Field Artillery moved to White City, an area of ground about mid way between Auchonvillers and Beaumont Hamel. The brigade operated howitzer guns and would be in action for the attacks on Beaumont Hamel and Serre – zero hour was timed at 5.45am on 13 November 1916. Visibility and observation were variable, some days were overcast and foggy, others bright and clear; depending on conditions they were tasked with firing on enemy assembly points in the rear or front line trenches. The guns were directed from observation points as well as aeroplane spotters. Throughout the time they were subjected to counter battery fire; on 14 November 2 guns from A Battery were buried by shell fire and 1 gun from B Battery was put out of action with 1 OR wounded. On 16 November a shell hit D Battery’s ammunition pit with 1 OR KIA and 1 wounded. On 17 November A battery’s telephone dug out was hit with 1 OR killed and 2 OR wounded. No other casualties are reported. The Brigade remained in the area of White City until the end of the month.

GOOGLE MAPS Street view looking across to White City – the earth bank was the location of many dug outs and storage depots (see photo below). 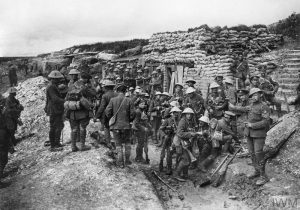 The 16 Bn Lancashire Fusiliers were not engaged in the fighting during the Battle of Ancre. The battalion arrived at billets near to Mailly Maillet on 17 November and spent a day on carrying parties up to the line at the recently captured Beaumont Hamel. On 19 November they relieved the 2 Bn KOYI in Wagon Road – a track way running north from Beaumont Hamel. There was frequent shelling of Wagon Road and of Beaumont Hamel. Between 19 and 22 November casualties were ORs 13 KIA and 35 wounded.