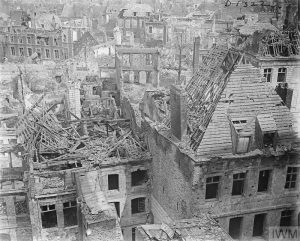 Arras is a city in France that was about 10 kms behind the British lines. A number of battles were fought in the vicinity notably the Arras Offensive in April 1917; but also in 1914, when the town was re-captured from German occupation, and 1918, during the Kaiser Offensive and 100 Days. About three quarters of the city was destroyed from shelling and aerial bombardment.

The Arras Offensive, along with the Somme and Third Ypres, was one of the major British offensives. The battle front was either side of the River Scarpe from near Queant in the south to beyond Lens in the north. The main objective was to support a French assault at the Chemin des Dames and the River Aisne. The Offensive was fought between 9 April–16 May 1917.

Battles of the Scarpe 1917 – the battleground was astride the River Scarpe – GOOGLE MAPS.

Vimy Ridge Canadian troops successfully captured, at heavy cost, the Ridge at the northern end of the battle front; now the site of The Vimy Memorial (CWGC).

This Phase was successful. The high ground at Vimy Ridge was captured and a week later the advance would continue in the south along the Scarpe.

Second Battle of the Scarpe 23-24 April.

Third Battle of the Scarpe 3-4 May

By 4 May the Offensive ground to a halt. German forces had regrouped and British lines were becoming over extended. The attack did not succeed and both sides consolidated their new positions.

August 1918 – 100 Days Offensive – During the 100 Day Offensive British forces advance to the Hindenburg Line, which at Arras was named the Drocourt – Queant Line. Operations began on 26 August with fighting along the River Scarpe.