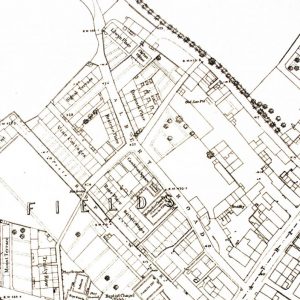 Albert Road and the area between it and Castle Street, taking in the Rope Walk, were developed in the 1860s as part of the housing boom following the arrival of the railway in the town and the establishment of Cambrian Railways Headquarters in Oswestry.  Trinity Street was a narrow lane leading from Albert Road through Rope Walk to Castle Street. Along the Rope Walk, from Beatrice Street end, were Bethel Terrace, Rose Place, Rose Cottages and Vine Cottages, which stood at the top of Rope Walk by Cripplegate. Cripplegate sometimes Cripplegate Street ran from Castle Street towards the top of Rope walk where Swan Crescent stood. Today Denmark Place (built1864) are Nos 2-10, Clifton Villas Numbers 12 and 14 and Llwyn Place (1862) are 16-20 Albert Road. Much of this area of Victorian back-to-backs was demolished in 1960’s for the development of Castlefields.

Bethel Terrace, Albert Road Sometimes known as Bethel Cottages, a row of 5 houses off Beatrice Street, at the rear of Albert Road Calvinistic Chapel next to Rose Place along, the Albert Road side, of the Rope Walk.

Cambrian Square, Albert Road Possibly also known as Cambrian Terrace at the juction of Albert Road with Trinity Street opposite Beatrice Place. Includes The Old Three Pigeons which is still there today.

Castle Square, Albert Road Part of the development of the Rope Walk during the early 1860s. Close by was Castle Terrace built around 1851.

Denmark Place, Albert Road Now 2-10 Albert Road, even numbers only this side of the road, built 1864.

1    Private 21270 Edward W (William Edward) Lyndom, 7 Bn King’s Shropshire Light Infantry,    Family home in 1901, also lived at Coney Green and Willow Street. In 1911 his married sister Lizzie was at 6 Signal Terrace with one of this other sisters Margaret, described as an imbecile,

8     Lance Corporal 201314 Hubert W Gwilliam, 5 Bn Royal Welsh Fusiliers.   Shop which once had had been a military outfitters.   Born Shrewsbury and lived on High Street, Shrewsbury before moving to Oswestry.

ARTHUR STREET The name came into use more generally in 1850s before that it was known as Street Arthur. It links Bailey Head with Willow Street at this junction is the Butcher’s Arm’s, know as a public house since 1783. This gave rise to its alternative name of Butcher’s Arms Shut. In this area are some of the oldest houses of the town.