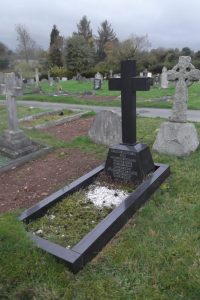 James Bayley was born in Oswestry in 1881 to John (a builder) and Mary Ann (nee Thomas). In 1911 the family was living at 7 Salop Road. James first worked as a house painter, and by 1915 as a gymnastics instructor for Oswestry Corporation. He married Florence Mary Smith and was living at New Cottage, Lower Brook Street, Oswestry. They had no children.

James had previously been in the Shropshire Yeomanry and had enlisted on the Reserve list in December 1915. He was mobilised in April 1916 and duly reported to the RWF Depot at Wrexham and was sent to Park Hall Camp for further training.  On 16 November 1916 his unit were to have live grenade training at the Grenade School at Hindford (located just to the west of Hindford and near the River Perry) under the instruction of Lieutenant Stanley Crabb and Sergeant Frederick Cartwright. The men were in a 6’3” deep trench. He was the first to throw a bomb and after doing so went up the trench. The other men then began to take their turns. James kept putting his head by a loop hole to see the result of the explosions. He was told not do this and was reprimanded by the lieutenant and the sergeant and warned to keep his head down. As the next man was about to throw the sergeant shouted a warning and checked to see everyone was ready. He looked over to where James was and saw him lying on the trench floor. He had been hit in the head by a grenade fragment. 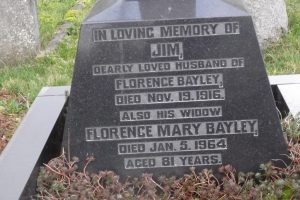 He was still alive so they bandaged him up and called an ambulance to take him to Park Hall, Military Hospital, Oswestry. He was attended to by Major Cory of the RAMC. His prognosis was not good. James had been wounded to his left temple, brain matter was oozing out and the Major was able to pass a probe 5 inches into the centre of his brain, he concluded ‘no further steps possible’. James survived for another 4 days drifting in and out of consciousness and died on 19 November 1916. An inquest on the 21 November passed a verdict of ‘came to his death accidentally, causally by misfortune and not otherwise’. James is buried in Oswestry Cemetery. He was 34 years old. He is also commemorated at St Oswald’s Church, Oswestry.