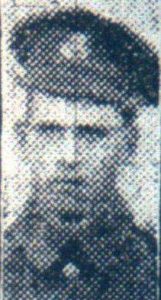 John Edward Chetwode (Chetwood) was born in 1896 at Pant, Llanymynech (his birth is also given as Oswestry and St Martin’s but Pant is the most probable).  His parents were Joshua and Mary Chetwode. His father had various jobs, working as a carter on a team of agricultural horses, as a steam fireman and a quarryman. In 1901 they lived at Upper House, Llanymynech and would later move to Holly Cottage at Porthywaen. By the outbreak of the war they had moved to 2 Vyrnwy Terrace, Morda. John’s siblings were Sarah, Joshua, Alice and Florence. Brother Joshua, 4 years older, was also KIA during the war. In 1911 John was working and living at Blodwel Farm and working for Martha Ward- a widow and farmer. Previous to enlisting he was employed by Mr Wainwright of Sweeney.

John enlisted in July 1916 and was posted to 1 Bn King’s Shropshire Light Infantry. He likely went over to France in late 1916 or in 1917. The battalion had a number of drafts during this period. He was killed in action on 17 April 1917 during a raid on the enemy front line at Loos. He was buried at Tosh Cemetery –  a battle field cemetery – and re-interred after the war at Dud Corner Cemetery. His headstone reads ‘Well done, thou good and faithful servant’. He is also commemorated at St Oswald’s Church, Oswestry.